none
»» Antonio and His Treasure 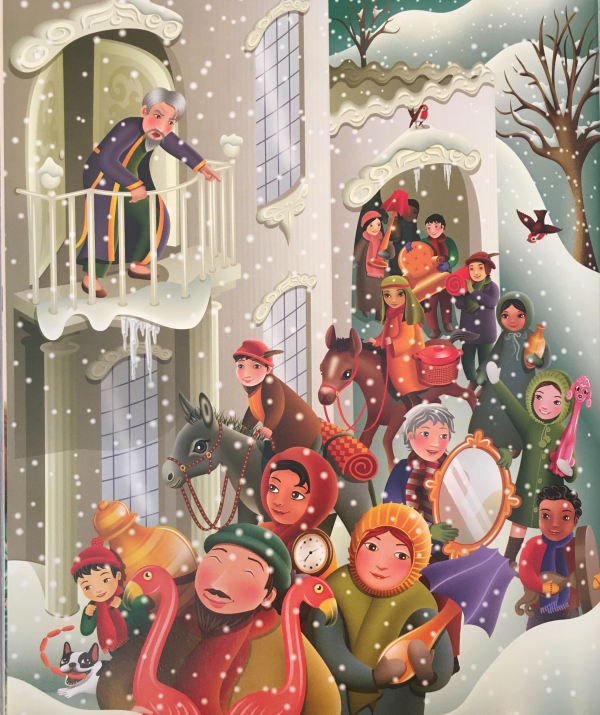 Relax, close your eyes and imagine a long table piled high with gold pieces in the great hall of a palace. Counting the coins is the king’s treasurer, a man called Antonio. He’d once been a generous man, but people said that counting gold had turned his heart cold and hard. Every night, after he had finished at the palace, Antonio would return to his house and count his own gold. But one day Antonio had a great fright that was to change him for ever. Listen carefully to his story.

It was a cold winter's evening as Antonio walked back to his house. He stopped by an inn and looked through the open window “I would love a nice hot drink,” he thought, “but I mustn’t waste good money on such silly things.”

As Antonio walked home through the snow, he grew colder and colder and more and more grumpy.

“What’s wrong?” asked his wife Rosa when she saw him. “Your face is so long your jaw might hit the ground.”

“Oh heavens, is that all?” Rosa exclaimed. “Why don’t I make a big jug of hot fruit punch and invite the neighbours around. We can have a little party,” she suggested hopefully.

“And who’ll be paying for this party?” asked Antonio.

Rosa sighed. “If you’re worried about the cost I'll make just enough punch for our household,” she said.

“Are you suggesting we spend good money on the servants? That's extravagant,’’ said Antonio.

“All right, I’ll make just enough punch for you, me and our children,” said Rosa.

Antonio thought for a moment. “The children are too young to appreciate it,” he said.

“What if I make just enough for you and me?” asked Rosa. She was getting fed up now.

Antonio's jaw dropped. “Surely you don’t want any, do you?” he asked. “I’ll send a servant to the inn to buy me a tankard of fruit punch.” He carefully took one gold coin from his purse.

When the servant returned Antonio grabbed the tankard and went straight upstairs to his bedroom. He climbed into bed and drank all the punch. Then he fell into a troubled sleep, upset about having spent a whole gold coin.

What Antonio didn't know was that Dusty, a house sprite, had been watching all that had taken place. Dusty looked just like a person but he was as small as a mouse. He wore a brown tunic and a brown cap perched on his head.

“You’re a very greedy man,” said Dusty to the sleeping Antonio. “It's time for you to learn about sharing!”

There was a puff of smoke, a sneeze and a hiccup, then the smoke cleared. Dusty the sprite was no longer there. In his place stood a second Antonio!

Dusty picked up Antonio's purse filled with gold coins. “Let’s put this money to good use,” he said. Then he let himself out of the bedroom and locked Antonio inside.

“Rosa, my turtle dove, where are you?” called Dusty in Antonio’s voice. “I’m sorry for being so mean earlier. Let’s have a party and invite all the neighbours.”

“Oh, Antonio, that would make me so happy,” said Rosa, amazed to see her husband smiling cheerfully. “But this is very unlike you. Are you feeling quite well?”

“I’ve never felt better!” Dusty said with a smile. “I’ve turned over a new leaf.” Then the sprite took out Antonio’s purse. “Spend all this money on whatever you need.”

Rosa called all her friends and neighbours to the house. When the party was in full swing, Dusty started offering the guests the most expensive ornaments and furniture as gifts.

“May you live to be a hundred, generous Antonio!” cried his neighbour Benita. “May I take this beautiful lamp from your hallway? I’ve long admired it.”

“Of course!” said Dusty and Rosa together.

The sound of people laughing, talking and carrying away his goods finally woke Antonio.

“What’s all that noise?” he wondered. From his balcony he saw a crowd of people carrying off his possessions. He was speechless with rage. His neighbour Benita looked up to the balcony and waved. “Thank you for being so generous, just as you always used to be!” she called.

Rosa appeared with Dusty the sprite by her side. Dusty still looked exactly like Antonio. On one side stood the real Antonio, shaking and angry. In the doorway stood another Antonio, smiling and happy and holding Rosa by the hand.

Rosa looked from one Antonio to the other. “What’s going on?” she asked, completely confused.

Rosa looked at the shouting, angry Antonio, then she turned back to the smiling, gentle Dusty. “This is my Antonio, the kind and generous man I married. Throw that horrible imposter into the street.”

There was a great puff of smoke. Once it had cleared, Dusty the sprite appeared in his true, tiny form. Antonio and Rosa couldn’t believe their eyes.

“Rosa, I’m not Antonio, I’m Dusty the house sprite. Antonio, when you were young and poor you were a happy man. Now you work only for gold, but gold cannot make you happy. It’s only sharing gold that gives it any purpose. Change your ways or you will lose your home and your possessions and, worse still, your wife and children.”

Antonio was terrified to think of all that he could lose. “I promise to be kind and generous, as I once was,” he said. “I now realize what is truly important. And it isn’t gold.”

From that day onward Antonio returned to being the man Rosa remembered. He shared his money and his possessions generously. And he realized that he gained great joy from seeing the people he cared for happy. That was worth far more than his gold.

What we choose to do in our lives affects our mind and our heart. Think carefully about the work you would like to do when you grow up. Will it help you to help others?