none
»» Danan and the Serpent 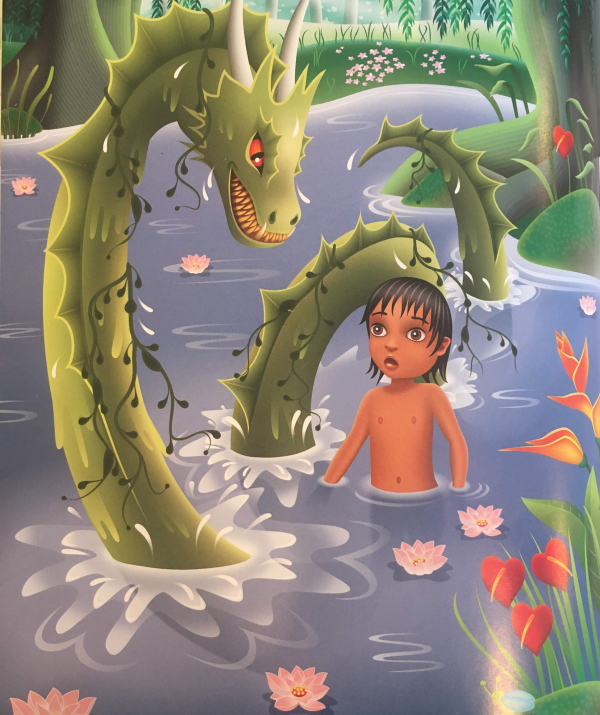 Tải sách dạng
epub, mobi, lrf...
(có phí)
Relax, close your eyes and imagine that you’re walking through a dense jungle on a hot and humid day. This tale is about three children, called Keisho, Charini and Danan, whose forest adventure ended up being bigger than they had bargained for. Listen carefully to their story.

“Please can we go on a picnic!” pleaded the children.

“The forest can be a dangerous place,” their mother said. “You must all take care. Keisho, you’re the eldest and you must look after your sister and brother.”

The delighted children set off through the forest. It was very hot and soon their clothes and hair were wet with sweat. They came to a rocky outcrop that cast a deliciously cool shadow and decided to rest there.

“You two set out the picnic, and I’ll go to the pond we passed and get some fresh water,” said Keisho.

But when he reached the pond, Keisho completely forgot about fetching drinking water. The pond sparkled and glistened and looked very inviting.

“I’lll just go for a quick swim,” he said to himself. He took off his shirt and waded in.

Suddenly the water began to churn and froth. Keisho gasped in fear as a great serpent rose up from the depths. The serpents skin was slimy with weeds and its red eyes glared. “Mmm, do I smell lunch?” it hissed.

“Maybe I will, and maybe I won’t,” teased the serpent. “If you can answer my question I’ll let you go.” He smiled at Keisho with all his yellow fangs.

“Tell me this,” hissed the serpent. “What’s the wisest thing you’ve ever learned?”

Keisho frowned with concentration. Then he remembered the advice of his school teachers. “The way to happiness is to study hard and get a good job,” he said.

“Wrong!” cried the serpent. He wrapped himself around Keisho and dragged him deep under water and through a dark tunnel. Just as Keisho thought his lungs would explode, they burst through the water and into a cave. High up on the cave wall was a small hole that let in sunlight and fresh air. Keisho found that he could breathe.

“Welcome to my larder,” hissed the serpent. “I’ll keep you nice and dry here until I’m ready to eat you.”

Charini and Danan were wondering where Keisho was. “You know what he’s like. He probably got distracted,’’ said Charini. She didn’t want to frighten her little brother. “You wait here and I’ll go and see what's keeping him.”

But when Charini reached the pond, she forgot all about Keisho. All she had eyes for was the beautiful blue water glittering in the sunlight. “Oh, I’m so hot. I'll just wade in for a moment to cool down,’’ she said to herself.

As soon as her feet entered the water, the serpent rose from the depths. Charini screamed in fright.

“Mmm, I’ve got my lunch waiting in my larder, but is this my dinner I smell?’’ The serpent flicked out his long tongue.

“What have you done with my brother?” cried Charini.

“That’s for me to know and for you to find out,” said the serpent. “Now, answer me this question and I’ll let you go. I might even tell you where your brother is as well.”

“Tell me this,” said the serpent. “What’s the wisest thing you’ve ever learned?”

Charini thought about the advice her teachers had given her. “Good little girls should be seen and not heard if they want to be happy,” she said.

“Wrong!” cried the serpent. He dragged Charini beneath the water and locked her in the larder with Keisho.

When Charini didn’t return, Danan set off to look for his sister and brother. Beside the pond, he saw two sets of footprints going into the water - but none coming out.

The serpent was watching the little boy and saw that Danan stopped at the pond’s edge and did not enter the water. “Let’s see how clever this young one really is,” the serpent thought. He used his powerful magic to give himself the appearance of a woodcutter, then came up to Danan.

“Young friend,” the serpent in disguise said, “you look hot and tired. Why not refresh yourself in the cool water?”

Danan always trusted his instincts and something about the woodcutter was not right. “Who are you and what have you done with my brother and sister?” Danan shouted.

The serpent laughed and dropped his disguise. He slithered back into the water. “They waded into my pond. I asked them a simple question that they couldn’t answer, so now they are mine. Would you like to try to answer it?”

“If I get the answer right will you set them free?” asked Danan.

“Very well,” said the serpent. “Tell me: what’s the wisest thing you’ve ever learned?” Danan thought for some time.

“Well?” said the serpent. “I don’t have all day. I have lunch to prepare.”

Danan couldn't think at all when he was anxious. So he took a deep breath and did his best to relax. He recalled sitting on his father’s knee as a very young child. What was it his father had said? Then he remembered.

“Don’t harm yourself or others and be kind to everyone; then you’ll have a good life,’’ said Danan.

“Well done,” said the serpent. “You’ve shown great wisdom. I’ll release your brother and sister.” He dived into the pond and brought Keisho and Charini to the surface.

The serpent called out, “To be truly wise, you must put into practice these wise words; otherwise they are meaningless.” With this he disappeared.

The three children hugged each other in great relief. From that day on they did their best to be kind to everyone they met. And whenever they were tempted to wade into a pond again, they always checked carefully for serpents first.

Living a worthwhile life means doing our best at all times and showing goodwill toward others. This also means not doing things that harm ourselves and others.