Người duy nhất mà bạn nên cố gắng vượt qua chính là bản thân bạn của ngày hôm qua. (The only person you should try to be better than is the person you were yesterday.)Khuyết danh

Chúng ta có lỗi về những điều tốt mà ta đã không làm. (Every man is guilty of all the good he did not do.)Voltaire

none
»» The Beautiful White Horse 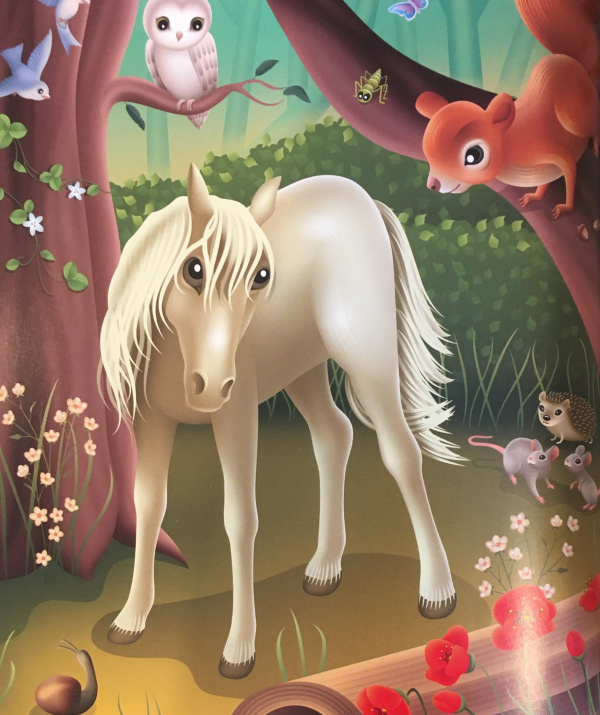 Tải sách dạng
epub, mobi, lrf...
(có phí)
Relax, close your eyes and picture yourself in the middle of lush grassland. This is the home of a herd of wild horses that roamed free across the plains. Our tale is about one of these horses, a beautiful young filly called Dawn. Dawns coat was the colour of snow and was so pure and bright that she could even be seen at night. Word spread quickly about this magnificent horse and even reached the ears of the king himself. Would you like to know what happened? Listen carefully to her story.

“I want you to capture this white horse and bring it to me,” King Claude said to his guards. “It’s only fitting that a handsome man like me should own such a beautiful filly.”

It was an easy ride from the palace to the plains and the guards soon spied Dawn drinking her fill at the edge of a lake. They galloped toward her and threw a rope around her neck. The more Dawn struggled, the tighter the rope grew. At last she knew she was caught and the guards led her back to the palace.

The king’s courtiers crowded around Dawn, pushing and pulling to get a good look at her. Her neck was sore from the bite of the rope and the terrified creature shook from her mane to her hooves.

The king shooed the courtiers aside and stood in front of Dawn. “You belong to me now. I’m your king and master,” he said in a loud, harsh voice that hurt Dawn’s ears. She longed to be back running free on the plains where the only sounds were the wind in the grass and the call of birds.

Dawn was shut up in a pen in the stable block. Boris, the stable boy, was a bully. He took great delight in frightening Dawn and prodded her with a broom handle, just for fun.

“I’m in charge of you now, so you’d better behave,” Boris warned Dawn. He yanked the rope around her neck hard to make his point.

The king wanted to ride his beautiful white horse through the streets of his city so he could show her off to his people.

“You must train this horse so that she’s safe for me to ride,” he said to Boris. “If you do a good job I shall reward you with a gold coin.”

Boris was greedy and straightaway set about training Dawn. He tried to put a saddle on her back, but she reared up on her hind legs and neighed in fear. The more Boris approached Dawn, the more scared and desperate she grew.

Boris was losing his temper. He picked up a broom and ran toward the horse, as if to strike her. In a wild frenzy Dawn reared up, then dashed as fast could across the yard. She leapt over the gate and kept on galloping and didn’t stop, even when she reached a great forest. Still frightened, she pushed on hard through the trees and bushes.

Dawn was safe now. She was deep in the forest where there were no buildings or roads or paths of any kind and she couldn’t be found by the king or his guards. But Dawn did not feel safe. She jumped in fear every time the wind rustled through the leaves or a twig snapped under her hoof - she thought the king’s guards had come for her.

A wise old squirrel called Sam sat high in a tree nibbling nuts. He watched the frightened horse paw the ground, twitch her ears and roll her eyes at the slightest sound. It made him sad to see how nervous and upset she was.

“I must help her,” said Sam to himself and he climbed down a branch towards Dawn. “Hello,” said Sam, as gently as he could, as Dawn shook her head in terror. “I don't mean to startle you. I only want to talk to you.”

Dawn was calmed by Sam's kind voice. She told the old squirrel all that had happened to her.

“I’m very sorry about what happened,” said Sam, smiling gently at Dawn. “I can understand how frightened you must have been. The king and his men treated you cruelly. But that’s all in the past now. You’re safe here and there’s no-one who can harm you.”

Dawn stopped pawing the ground and listened carefully. “There’s nothing to be frightened of here in the forest,” Sam went on. “No humans ever come here. They can’t make their way through the thorny bushes and tangled trees. There are only us animals - mice and snails and squirrels and birds - and we’re all rather shy ourselves.”

“Look around, there’s nothing to fear,” repeated Sam. “It’s just your mind, your own imagination that’s frightening you. You’re seeing things that are not there. Only your thoughts can scare you here. You just need to control your imagination and you can control your fear,” said Sam.

Dawn slowly nodded her head and thought about the squirrel’s kind and wise words. She looked around her and saw the trees of the forest and some friendly animals who smiled and winked at her. The king and his guards were a very long way away. She remembered how difficult it had been to make her way this deep into the forest. It would be harder still for humans.

Dawn knew Sam was right and she thanked him for his help. And she decided to follow his advice. From now on, she wouldn’t let her imagination get the better of her.

Several days passed. Although Dawn was still nervous at times, gradually she became less afraid. When a noise startled her, she calmed herself by thinking through all the possible explanations.

“That’s just the trees swaying in the wind,” she told herself Or, “That’s just a twig cracking. It's probably Sam coming to visit me, or one of my other new friends.’’

Dawn used the power of her own mind to control her thoughts. Now she was no longer led by her fear. Little by little she became happy once more and started to enjoy her new, peaceful life in the forest with her caring new friends.

And there was one friend whom she cherished above all - Sam, the wise squirrel, who’d taught her so much.

Sometimes we’re so afraid of something that our fear takes over. Remember that you only need to control your imagination and you can control your fear.