none
»» Dalai Lama: 5 things to keep in mind for the next four years 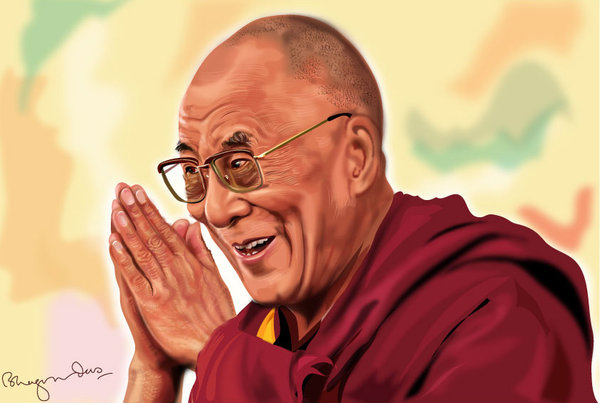 Tải sách dạng
epub, mobi, lrf...
(có phí)
(CNN)The Dalai Lama has some advice for anyone who is looking for happiness, no matter what their circumstances.

The Nobel Peace Prize-winning spiritual and political leader of the Tibetan people in exile, spoke about the incoming administration in an interview with CNN's chief medical correspondent, Dr. Sanjay Gupta.

The "president, of course, (is a) very important individual, but basically I (am) always telling (people), the world belongs to humanity," said the Dalai Lama during the Emory-Tibet symposium of Scholars and Scientists held at the Drepung Monastic University in India in December. "Each nation belongs to the people," he said.

In other words, take comfort in the fact that our country is not run by a lone individual, albeit one that is incredibly powerful.
"America, I consider the leading nation of the free world," His Holiness said.

In an earlier interview he said he plans to meet with President-elect Trump after his inauguration and added that once in power, all presidents are forced to work with "reality," and "so I have no worries."

America will always keep an "emphasis on liberty, democracy, rule of law," he said, and "the people elected now have the responsibility" to work together and will have to use "team work," since "America is a democracy and the power is divided."

If, however, someone's confidence in the country's checks and balances is still failing them, His Holiness has some additional advice to help you stay happy, no matter what happens in the world around you.

First step, work on compassion and start by developing it for yourself.
"Mainly," he said, feeling happy is largely about "your own mental attitude."
If you remain someone who is "honest, truthful," about how you feel, you can find happiness "no matter what (the) surrounding situation."

His Holiness is talking, in part, about the Buddhist concept of self-compassion. He believes we'd all be happier people if we learned more about our own selves and embraced who we are, flaws and all.

When you have compassion for someone, typically that means you are recognizing and validating someone's pain.

Psychologists have shown when you do that, you automatically develop feelings of kindness and caring for that person. You develop concern for their general well-being.
Self-compassion, then, is when you are kind, rather than critical, toward yourself, even when you mess up or when you are in some form of emotional pain.
Don't confuse this with self-pity, when you dwell on that pain. Instead, it's when "in instances of pain or failure, rather than being harshly self-critical; perceiving one's experiences as part of the larger human experience rather than seeing them as isolating; and holding painful thoughts and feelings in mindful awareness rather than over-identifying with them," writes scholar Kristin Neff in Self-Compassion and Pscyhological Well-Being.
Neff is an associate professor at the University of Texas at Austin's department of educational psychology and an expert on self-compassion.
"Most people have much more compassion for others than themselves," Neff said.
If you can develop a compassion toward yourself, it is easier to feel compassion toward others "and is much more sustainable," Neff said.
And the Dalai Lama believes that with less self-criticism, your "health will be much better." Many studies back that up.

It's a lot easier to feel compassion if you take the time to reflect on what you're experiencing. The Dalai Lama, for instance, gets up at 3am to meditate five hours a day.
You probably don't have that much time, but even 10 minutes of meditation has been shown to help your thought process. Meditation can physically change the parts of the brain that help you better handle stress and increase your feelings of empathy, studies show.
Longer meditation sessions, even 20 minutes, can improve your mood, your attention span and memory.

Thinking more deeply, you start to realize, His Holiness said, that "nothing exists as (it) appears."
Take the time to put your feelings in context, he said, "then the very basis of these negative emotions becomes thinner, thinner, thinner."

If you do feel angry about the election, or any other circumstance, don't let it dominate your thoughts. Constant anger can lead to depression, insomnia, overeating, heart problems, strokes and early death, studies show.

"Constant anger is very bad for our health," His Holiness said. "I try to keep compassion" constantly in mind and then stay "surrounded by (other) compassionate people" that can reduce your anger. Do that and your health will be "much better."
A lot of negative thought is rooted in perception, studies show, but that doesn't have to mean you become a Pollyanna about negative experiences. "If a glass is half full, you can't pretend it's full," Neff said. "If you can think about wrapping your suffering and anger in a kind of care and compassion and concern, it can activate the reward center of the brain."
Working with Tibetan teachers over the years, she said, she has been impressed that despite their difficult circumstances of having to flee their country and live as refugees, as the Dalai Lama has since 1959, many people seem to be happy. "It is not like they deny their suffering, they are open to it, but they hold those feelings with love and compassion," she said.

Another key to happiness, His Holiness suggests, is to "try to be of some service to others." If you can help others, then "no matter what (the) surrounding situation, you can keep (up your) self-confidence and happiness."

Service can come in the form of volunteering, like at a soup kitchen, or on a candidate's campaign, but it can also be simpler, like being a good listener when people are upset.

Simple acts like being a good listener can also reduce your own feelings of stress and improve your feelings of well-being, other studies show.

Finally, be playful and childlike. Children, the Dalai Lama said are "very honest" and often accept people without judgment.

His Holiness is constantly laughing and he's playful even when he speaks about such serious subjects.

Studies back up his advice, showing that adults who are playful have more positive relationships and better life satisfaction. They also tend to be healthier and experience less anxiety.

Considering this advice could make a real difference to how you experience the next few years.

"I will always feel there is real hope we can do something. So no matter (what the) difficult circumstances, it is really worthwhile," the Dalai Lama said.

"Make (an) effort (and) once you committed effort, even small effort results will come," the Dalai Lama said. "You get tremendous sort of satisfaction and then feel happy."