none
»» The Shiny Red Train 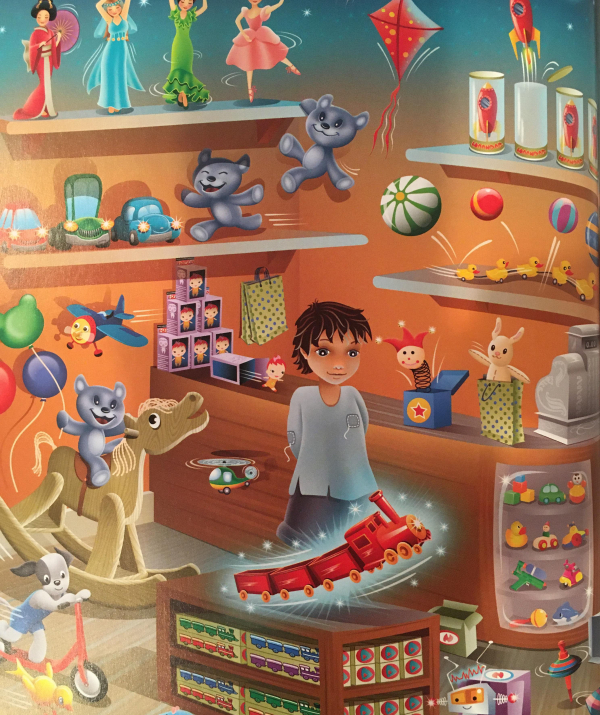 Tải sách dạng
epub, mobi, lrf...
(có phí)
Relax, close your eyes and imagine that you live with all your family in a tiny shack on a cold and windy beach. This story is about Michael, a little boy whose family was very poor. All his clothes were old and ragged and his toys had all been found on the beach. More than anything, Michael wanted a new toy. Listen carefully to his story.

One day, he and his sister Claire visited the town's toy shop, just to look at the toys. Michael found the most beautiful toy train he had ever seen.

“Put it back,” said Claire. She tried to wrestle the shiny red train from her brother’s grip.

“But I want it!” protested Michael.

“We haven’t got any money,” replied Claire firmly.

She managed to prize the train from his hands and Michael burst into tears. Everyone in the shop stared at them. Claire grabbed her brother’s hand and pulled him toward the door, knocking down a pile of stripy hula hoops. Everyone laughed as the children ran out the door.

Michael cried all the way home. His family’s beach shack was built from the bones of an enormous whale. Its walls were made of driftwood, and the roof was made, from pieces of plastic sheeting that had washed up on the beach. Claire loved their home, but Michael hated it. He wanted to live in a proper house. And he hated his old broken toys from the beach. His father fixed them as best he could, but they were not the same as new toys.

Michael went to bed that night feeling very sorry for himself. He couldn't stop thinking about the shiny red train he’d held in the toy shop that day. He wanted it so much, more than anything else in the world. Finally he fell asleep.

Michael opened his eyes. He was standing in the toy shop with Claire, but this time the whole place seemed to be alive! Toy cars beeped and flashed their lights at him, and trains shot past on invisible tracks. Teddy bears laughed and jumped from shelf to shelf and dolls twirled in their dresses.

“Could this be a dream?” Michael wondered, but everything was so real. Bright kites flew above his head and, when Michael looked up, the ceiling itself looked like the night sky, aglow with hundreds of little lights that twinkled like stars.

“It must be magic,” Michael thought. The shop door chimed as customers came and went, loaded with bags and boxes.

The cash register drawer flew open as the shopkeeper, Mrs Holly, rang up sale after sale.

Everyone looked full of joy. Michael felt happy too. On a cabinet right in front of him stood the shiny red train. It tooted at him and Michael reached out and touched it.

Claire pulled at his sweater. “Let's try the lucky dip.”

“But we haven't enough money, I told you that already,” she replied. “We've got enough for the lucky dip, though.”

Claire gave Mrs Holly the money for the lucky dip and thrust her hand into the bucket piled high with brightly coloured packages. “Oh! A beautiful doll!” cried Claire as she unwrapped her present.

When no-one was looking, Michael grabbed the red train and hid it under his sweater. As he did so, the bright lights of the shop faded and the teddy bears stopped laughing. With Claire close behind, Michael hurried to the door and plunged into the crowd of shoppers.

It was dark and cold outside. Michael pulled out the shiny train from under his sweater.

Claire began to cry. “You stole it,” she said.

“I don’t care,” Michael replied. His voice was cold and hard. “I wanted it.”

“But it belongs to Mrs Holly,” said Claire.

Michael walked down to the sea where the moon was shining brightly on the waves. He was admiring the way his train glittered in the moonlight, but then he spied a woman walking along the shore.

He hid the train under his sweater again. As the woman came closer, he saw she was crying and scattering bows and wrapping paper into the sea. Michael realized it was Mrs Holly.

“Why are you throwing away all your wrapping paper?” Michael asked her. He felt frightened.

“I’ve no need of it now,” Mrs Holly said, sadly “Little boys and girls come to my lovely shop and take my toys. If you don’t pay for them, I’ve no money to pay my bills. Today the landlord took my shop away.” She began to sob “I don’t know how I’ll feed my children.’’

The train hidden under Michael’s sweater felt hot. It was so hot it was like an ache next to his heart. Michael was ashamed. He understood now how selfish he had been. He pulled out the shiny red train and handed it to Mrs Holly.

As Mrs Holly took the train, rainbow-coloured puffs of smoke belched from its funnel and its whistle tooted loudly.

The train shot joyfully into the night sky leaving a trail of sparkly stars behind it before returning to Mrs Holly's arms.

The shopkeeper smiled as she leaned forward and kissed Michael on the forehead.

Suddenly, Michael was dazzled by morning sunlight. He saw above him the whale bones holding up the roof. He was in his own bed. “It must have been a dream!’’ he laughed.

Several weeks later Michael walked through the door of the toy shop. He went straight up to the counter and gave Mrs Holly all the money he’d saved from doing little jobs for the people of the town.

“May I please buy the shiny red train?” he asked her. “Of course, Michael,” smiled Mrs Holly.

As he walked out of the shop with his train wrapped in a big ribbon, Mrs Holly called after him: “Thank you, Michael.” She winked at him. And Michael smiled back.

Doing the right thing means not being selfish, however unfair life seems to be. It can be painful not to have all the things other people have, but we can always be grateful for what we do have.