Chớ khinh tội nhỏ, cho rằng không hại; giọt nước tuy nhỏ, dần đầy hồ to! (Do not belittle any small evil and say that no ill comes about therefrom. Small is a drop of water, yet it fills a big vessel.)Kinh Đại Bát Niết-bàn

none
»» The Enlightenment of Chiyono 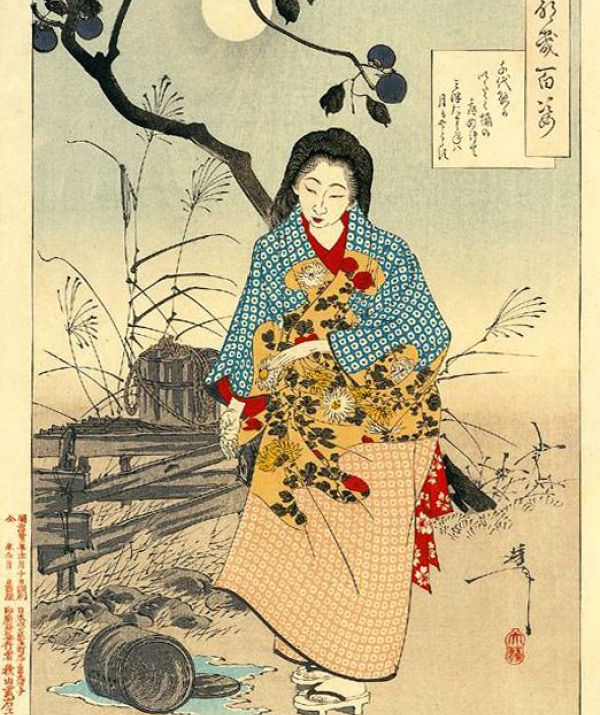 Tải sách dạng
epub, mobi, lrf...
(có phí)
In the village of Hiromi in the Mugi district there were three nuns who built a Zen temple and devoted themselves to practicing the Buddhist way. Together with other nuns who came from all parts, and, on some occasions, with numerous lay disciples, they assembled for communal Zen meditation and practice.

At that time there was a servant woman about twenty-four or twenty-five years of age who had been employed at the convent for many years. Her name was Chiyono. She was said to be the daughter of a high-ranking family. When the aspiration to attain enlightenment developed in her, straightaway she left her parent’s home and came to this convent, taking a position as a servant, cutting firewood and carrying water.

Chiyono observed the monastic women practicing Zen meditation. Without noticing it herself, she held their words and teachings in high esteem. She used to peek at the nuns through the gaps in the curtains that hung in the doorway, and then go back to her room and imitate them by sitting facing the wall-but without any benefit.

One day, Chinoyo approached a young nun. “Please tell me the essential principles of practicing zazen,” she pleaded.

The nun answered her by saying, “Your practice is simply to serve the nuns of this temple as well as possible, without giving any thought to physical hardship or uttering a word of complaint. This is your zazen.”

Chiyono thought to herself, “This is grievous! I make my way in the world as a lowly, menial person, living in pain and suffering. If I continue like this, I will suffer in the next life also. Time will pass, but when will there be a chance for me to attain salvation? What evil past has led to these karmic consequences?” Her grieving was endless.

On evening, concealed by the waning moon, she ventured near the meditation hall and looked inside. There she observed aspirants for enlightenment sitting in meditation with the nuns-laymen as well as laywomen, both old and young. Casting away utterly the concerns of the work, they were immersed in their practice of zazen. It was truly an impressive sight.

“Even girls too young to know the difference between right and wrong are in there practicing the difficult exercises of the monastic renunciant. Their desire to slip the confines of this world of delusion is very great. Admonishing themselves to try harder, they sit all night in single-minded silence without falling asleep. How can I who lack such impressive qualities ever be like them?

“These are all laypeople who amuse themselves by night and day and have no understanding of things-and yet they sit there on the mats, throwing away any thought of the world, never laying their heads down on a pillow. Their bodies are emaciated, their spirits are exhausted and yet they pay no attention to whether their lives are endangered. They possess a truly profound aspiration. How aptly they are called ‘disciples of the Buddha’” thought Chiyono to herself as she wept.

Now, one of the nuns at the convent was an elderly woman who was deeply compassionate by nature. One day Chiyono approached her and said, “I have a desire to practice zazen but I am of humble birth. I cannot read or write. I am not very smart. If I set an intention, is it possible I too might attain the way of the Buddha even though I have no skills?”

The elderly nun answered her, saying, “This is wonderful, my dear! In fact, what is there to attain? In Buddhism there is no distinction between a man and a woman, between a layperson and a renunciant. Also there is no separation between noble and humble, between old and young. There is only this—each person must hold fast to his or her aspiration and proceed along the way of the Bodhisattva. There is no higher way that this.

“You must not theorize about the words or teachings of the Buddhas and masters. According to the scriptures the goal is to attain Buddhahood yourself. These teachings say that zazen means ‘to seek the Buddha in your own heart.’ According to the ancient worthies, the teachings of the sutras are a like a finger pointing to the moon. The words of the patriarch are like a key that opens a gate. If one looks directly at the moon, there is no need for a finger. If the gate has been opened, there is no use for a key. A priest who is familiar with ten million scriptures uses not a single character word in zazen. Great learning and vast knowledge are only impediments to entering the gate of the dharma. They lead to philosophizing and words. If you know your own mind, what teachings about scripture do you need? In entering the Way we must rely on our bodies alone.

“Furthermore, those who would practice zazen should cultivate a heart of great compassion with the intention of saving all sentient beings. Do not seek enlightenment for yourself alone. Go to a quiet place, sit in lotus posture, and place one hand on top of the other. Without leaning to either side, bring your ears into alignment with your shoulders. Open your eyes only halfway and fix your attention on the tip of your nose. Rest your tongue on the roof of your mouth. Throw away your body and your life. Looking from the inside, your self has no mind. Forget also about your connections with others. Looking from the outside, there is no mind anywhere to be found. If random thoughts should occur to you unexpectedly, let them go straight away. Do not follow them. This is the essential technique of zazen. Believe this and stick to it, waiting faithfully.” The kindly nun explained all this in great detail.

Chiyono received these teachings with faith and made a prostration in front of the nun to express her happiness. “When I first began to practice zazen, the various things I had seen and heard in the past kept coming up in my mind. When I tried to stop them, they only increased. This teaching that I have just heard shows me that when random thoughts occur in my mind, I should let them exhaust themselves. I should not make an effort to try to stop my thoughts.”

“Yes,” the nun responded. “Otherwise it would be like using blood to wash out blood stains. According to an ancient teacher, ‘Sudden enlightenment is the medicine that cures our endless sickness.’”

Chiyono spoke, “If I carry on with this practice, commendable results will surely appear of their own accord. Surely, I will see Buddha nature clearly and truly achieve Buddhahood in an instant.

The nun intoned in a strong voice, “You have just now understood that all sentient beings have already attained Buddhahood. The world of life and death and the world of nirvana are like a dream."