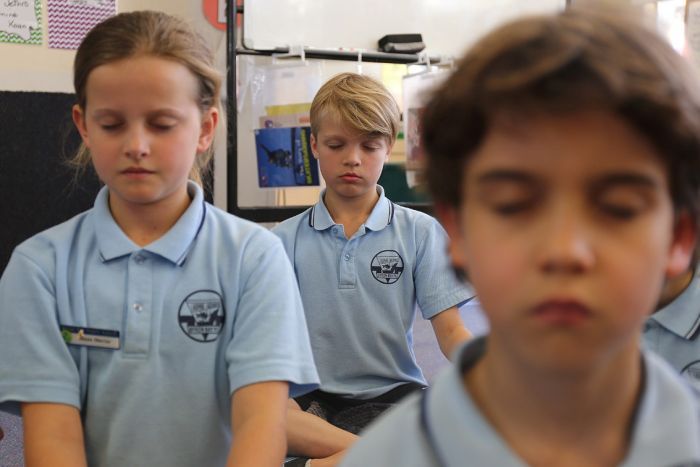 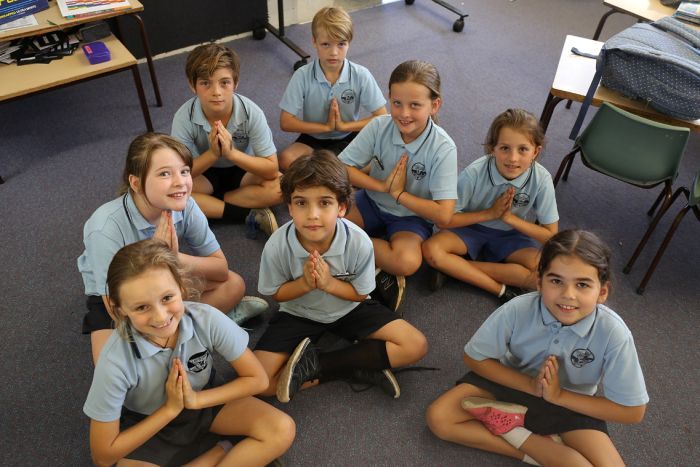 New South Wales public schools are struggling to keep up with demand for Buddhism scripture teachers.

Buddhist Council of New South Wales chairman Brian White said there were more than 3,000 public school students across the state studying Buddhism, and the number was growing rapidly.

"It's driven by a few things — general raising of awareness in meditation right across society and how beneficial that can be, and the realisation that even six and seven-year-olds can meditate for a few minutes and benefit from that," Mr White said.

"But also Buddhism itself has a fairly good image across society of being a peaceful and practical way of life."

"We have a waiting list of schools across the state and we're being contacted all the time by different schools that need Buddhist teachers for their classes," he said.

One of the schools experiencing high demand for Buddhism classes is Byron Bay Public in northern New South Wales.

More than 150 children are enrolled in Buddhism at the school, representing more than a quarter of the student population.

Program co-ordinator Emily Coleling has posted a callout in the parent newsletter asking for more volunteer teachers to help meet the demand.

"I think we're probably in quite an open-minded area, the Northern Rivers, and Buddhism is a fast-growing religion," she said.

"I think it's unfortunate people are turning away from Christianity for whatever reason and Buddhism seems to offer something there.

"A lot of the children actually go from one scripture class to another, so Buddhism is one they'll experience, then they might go to Ba'hai or Christian or ethics and then they can choose for themselves — so that indicates an open-mindedness on the part of the parents in this area too."

"There are significant numbers of people who have converted to Buddhism or who practice what some scholars have called 'nightstand Buddhism', as in you might not say you're a Buddhist but you might be interested in meditation, or you might read books by the Dalai Lama," Dr Halafoff said.

"I think Buddhism has widespread popularity in Australia and I think part of that is to do with the public profile of His Holiness the Dalai Lama who is viewed very positively in Australia."

Dr Halafoff also said a dissatisfaction with mainstream Western religion had contributed to the interest in Buddhism.

"Mainstream religion is currently being critiqued by individuals and also by groups — we've had things like the Royal Commission," she said.

"We know that people are now drawn to a more individualised approach to religion, people like to pick and choose and combine different things.

"There's a lot of things going on here why people might be turning away from mainstream Christianity and also maybe being drawn to other religious groups but also maybe not being religious at all."

Religious education rules in government schools vary by state in Australia, with Victoria removing Special Religious Instruction from its curriculum earlier this year.

However, Federation of Australian Buddhist Councils president Cecilia Mitra said the demand in New South Wales would be replicated across the country if Buddhism was readily available at all government schools.

"There's a lot of interest in the study of Buddhism, however under Special Religious Education, which is 30 minutes a week and at the discretion of the principal, in Western Australia for example there's not much Buddhism represented in the schools," Ms Mitra said.

"Principals are not really contacting the Buddhist centres and, to me, the study of different religions is very important in schools."

Dr Halafoff said the demand for Buddhism may actually work against the argument for keeping scripture in schools.

"In an ideal system, with scripture or special religious instruction, you may want to be able to offer eight or nine options to every single school in the country so that people really could make a choice," she said. "But it would be impossible to do everywhere. "The main problem, and what we're seeing here, is that for minority religious groups, many of them are under-resourced so they can't possibly staff that many programs.

"You end up with a circular argument, which may arrive back to the point that it may be better for Australian students to all have a chance to learn about all diverse faiths and no-faith perspectives.

"In a sense where its education about them and not instruction into them, actually embedded into the curriculum and taught by qualified teachers."