Chớ khinh tội nhỏ, cho rằng không hại; giọt nước tuy nhỏ, dần đầy hồ to! (Do not belittle any small evil and say that no ill comes about therefrom. Small is a drop of water, yet it fills a big vessel.)Kinh Đại Bát Niết-bàn

none
»» Amrita and the Elephants 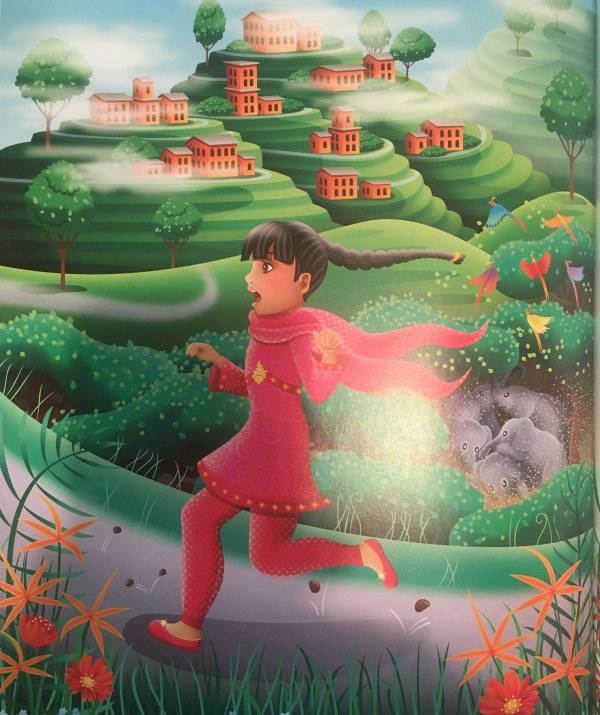 Relax, close your eyes and picture a little Indian girl called Amrita who was always worrying. One day she worried so much she managed to frighten not just herself but her entire village. Would you like to know what happened? Listen carefully to her story.

It was a lovely sunny afternoon and Amrita was sitting under a tree at the edge of the forest. Birds twittered in the branches and fluffy white clouds sailed across the sky.

“I don't like the look of those clouds,” Amrita was thinking to herself “It’s sunny now, but what if it starts to rain? I'll be completely soaked by the time I get home.”

Amrita began to wring her hands. “And what if it rains and rains and there’s a flood? Everything will be washed away - the farms, the animals and the village, too!”

Just at that moment the ground began to shake, there was an almighty crash, and a wave of dust rolled through the trees toward her. Birds flew from the branches into the sky, squawking in alarm.

“What could that be?” Amrita cried out. “It must be an earthquake! Nothing else could make that much noise!” She scrambled to her feet in terror.

Armita didn't wait to see what was happening in the forest. If she had, she would have seen a group of young elephants playing chase among the trees. Even though they were only young, the elephants were still very large and very heavy - and the ground shook beneath their feet.

Armita ran away from the trees and up to the village. She run right past her two friends Tylanni and Gomin, who were racing their bikes along the street.

“What's wrong, Amrita?” they called out.

“The world’s ending,” cried Amrita, who kept on running. “What do you mean, the world's ending?” asked Tylanni, frightened already. She and Gomin chased after Amrita.

“There was a great earthquake! I saw trees crashing to the ground! Our village will be destroyed!” cried Amrita.

The children shrieked. As they hurried through the village, everyone they met grew afraid as well.

“It’s the end of the world,” Amrita called out breathlessly.

Word spread through the village that the world was ending. A crowd of frightened children and adults were soon running in panic, looking for somewhere to hide. The donkeys, horses, cows, pigs, cats and dogs were all running, too. Everyone was following Amrita.

Ashoka, Amrita’s father, saw his daughter charging up the hill toward their house, followed by a huge crowd.

He put his hands up and shouted very loudly, “Stop!”

“It's an earthquake,” shouted Eila, the mechanic.

“No, I heard it was a tornado,” yelled Akash, the postman.

“You're both wrong, the moon is falling out of the sky,” cried Deepa, the baker.

Donkeys brayed, dogs barked, cats meowed and pigs squealed. The crowd stopped running and fell into arguing about how the world was ending.

Ashoka lifted his daughter up into his arms. She felt safe there and began to calm down. Ashoka asked the crowd, “Why are you so frightened?”

“There was an earthquake,” answered Rahul, the farmer.

“Who felt the earthquake?” asked Ashoka.

“Oh, we didn't see anything, Amrita told us about it,” they explained.

“It's true Daddy, I felt the earthquake,” said Amrita.

“Tell me what happened’ said Ashoka.

“Well, I was sitting under a tree at the edge of the forest, when the earth began to shake and tremble. I heard trees crash behind me, and a huge wave of dust rolled over me. There were screams and screeches from the animals. It was awful and really frightening.” As Amrita spoke, her voice began to quiver with fear again.

“All right, I think we should go and have a look in the forest,” said Ashoka.

“Oh no, Daddy, I’m too scared. We’ll be killed. We should get as far away as possible,” cried Amrita.

“You’ll be fine. I’ll keep you safe. You know I wouldn't let anything happen to you,” said Ashoka gently to his daughter.

Ashoka carried Amrita back to the forest. The crowd followed cautiously at a distance. As they got close Amrita cried out. “See, Daddy, the trees have fallen down! And listen to the animals!” She covered her eyes with her hands.

“Amrita, it’s okay. The world's not ending,” said her father.

When Amrita opened her eyes she saw the young elephants chasing each other through the trees, trumpeting in excitement. As they crashed into the trees, the earth shook and clouds of dust rose from beneath their huge feet.

Ashoka turned to his daughter. “You frightened yourself,” he said. “The elephants are just playing. There was nothing to be afraid of, provided you didn't get too close to them. Next time you feel frightened, take time to check what’s actually happening. Don’t rush to act before you have enough information.”

“You see, my daughter, how you have needlessly frightened yourself and the whole village? And this all happened through the power of your mind.”

Amrita bowed her head. “I’m sorry Daddy. I'll try not to jump to conclusions in future.”

Ashoka hugged his daughter. “All right then, let’s go home now.” They turned and walked toward the village.

“So the world’s not ending?” asked a latecomer as the crowd drifted away and people went back to their work.

“No, not today,” laughed Amrita. “I made a mistake. It was all in my imagination.”

The mind is very powerful and jumping to conclusions can get you into all sorts of bother. Take time to be sure of what you have actually seen, heard or felt before deciding what to do next.