none
»» Your Light May Go Out 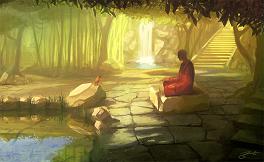 Tải sách dạng
epub, mobi, lrf...
(có phí)
A student of Tendai, a philosophical school of Buddhism, came to the Zen abode of Gasan as a pupil. When he was departing a few years later, Gasan warned him: “Studying the truth speculatively is useful as a way of collecting preaching material. But remember that unless you meditate constantly you light of truth may go out.”

• “Studying the truth speculatively is useful as a way of collecting preaching material.” This is a warning about learning philosophy and depending heavily on words and arguments of the Tendai school. In How Grass and Trees Became Enlightened we have talked about the futility of Tendai students’ entangling philosophical questions. Philosophy and argument, at most, are similar to collecting materials to preach. Preaching itself is not the truth, collecting materials is much further from the truth.

• “But remember that unless you meditate constantly you light of truth may go out.” The meditation here is Vipassana – looking deeply and quietly at something in the mind , looking deeply at something “as it is”, without reasoning, without explanation, without criticizing… Only looking , and looking very deeply. Thanks to such quiet and deep looking, we may attain Enlightenment – seeing the truth in everything.

If we don’t look deeply, but only like to philosophize and preach – things belonging to the realm of words – then our light of truth may goes out.

• Difference between “looking deeply” and “thinking”: Looking deeply means we only look at something as it is and don’t think about anything. This difference leads to the following differences.

1. The first difference is the quietness of emotion. We can think with all kinds of emotion in our mind, but when we look deeply our mind has to be vey quiet.

Example: I think about this guy who insulted me this afternoon, thinking and my blood boiling. But if I look deeply at home, then my mind must be quiet, no anger, not a wave when I look deeply at him in my mind.

3. The third difference is the concentration and the freedom of the mind: This is the consequence of the two preceding differences. When we think, we have hundreds of things – thoughts, emotions, arguments, conclusions, judgments running in our mind. When we look deeply we don’t have anything in our mind except for one image of what we are looking at, as it is, without the interference of arguments, judgments, or conclusions.

Example: Thinking about the verbal fight with the friend this afternoon, I can think: She said this, that was clearly intended to hurt me, why did she hurt me, because she is jealous with me, she is competing against me for influence…

Looking deeply about this fight, my mind is very quiet, not an angry wave, not a thought. I simply look at the images of the fight this afternoon… and see… her very sad face when she said this to me… and I couldn’t see those sad traces then, and I quickly gave her a horrible verbal punch… and she looked at me full of surprise and infinite sorrow… and walked out silently… and I decided that she ignored me… and I threw a following insult at her…

Another important point here is that when we think about the abstract subjects, we tend to follow some school of philosophical reasoning, such as existentialism or dialectical materialism, hence our thinking process is often narrowed and one-sided, because it is restricted within a reasoning framework of our school of thought. That is the reason why philosophers like to argue—one says “chicken”, the other says “ducks”.

When looking deeply, we only look at a thing as it is, hence we don’t follow any school of thought. Only deeply looking. Thus our mind is truly free and independence and our vision is much clearer.

4. The fourth difference is the conclusion: This is simply the results of the three previous differences: Thinking usually ends with a conclusion drawing from the line of reasoning, usually following the formulas of logics.

Looking deeply ends when we know that we have seen the entire picture, have wholly understood what we have been looking at, from inside out, from outside in, from every angle.

Example: Thinking about a thief: He entered the house, took the diamond ring and put it in his pocket, the whole thing was recorded in the security camera system. Conlusion: he is a thief.

• Before looking deeply, our mind must be still and concentrated (samadhi), meaning standing still. If our mind still jumps around, we cannot look deeply. Therefore, we often have to use Samatha Zen, such as breathing in and out and concentrating on our breath to achieve Samadhi, when achieving Samadhi, then we can look deeply at whatever we want to look at, and while looking deeply our mind will still be in Samadhi.