Người duy nhất mà bạn nên cố gắng vượt qua chính là bản thân bạn của ngày hôm qua. (The only person you should try to be better than is the person you were yesterday.)Khuyết danh 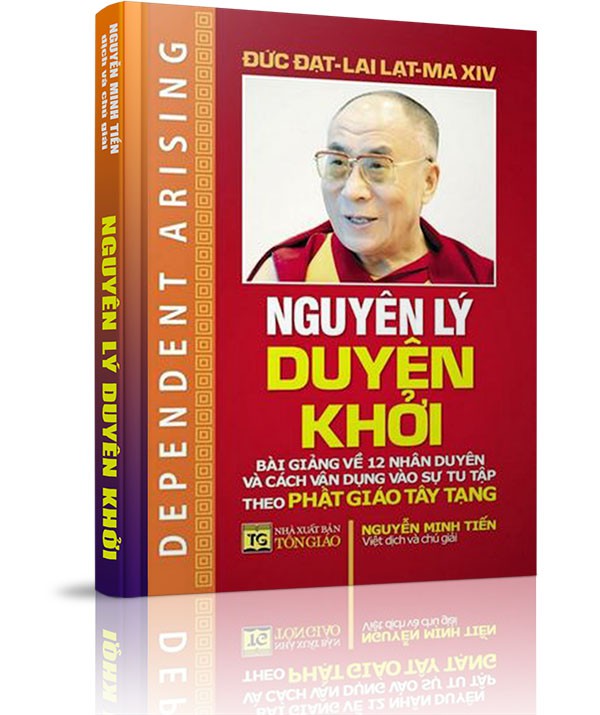 Tải sách dạng
epub, mobi, lrf...
(có phí)
In the context of altruism, the practices for maturing one's own continuum are the six perfections, and the practices for maturing others are the four ways of gathering students. Among the six perfections, each one is more difficult to achieve and is more important than the previous ones. The last two are concentration and wisdom. In terms of the Sutra Vehicle, there are the thirty-seven harmonies of enlightenment for the sake of achieving liberation, and as in Maitreya' s Ornament of Clear Realization, there are many variations of paths for the sake of achieving Buddhahood. The root of all these is the meditative stabilization which is a union of the calm abiding of the mind and special insight. As a means for achieving this stabilization quickly and in a powerful way there is the Mantric or Tantric vehicle. In the Perfection Vehicle the root of one's practice is the altruistic intention to become enlightened and the view of the emptiness of inherent self-existence. The greatness of Secret Mantra comes by way of meditative stabilization. Thus, it is even said that the scriptures of Secret Mantra are included in the sets of Discourses.

With the altruistic intention to become enlightened one is aiming at a Buddhahood that has a Truth Body that is the fulfillment of one's own welfare and a Form Body which is the fulfillment of others' welfare. Of the two, one is more specifically aiming at the Form Bodies in order to be of assistance to others. A Buddha's Form Bodies have the major marks and beauties of a Buddha's body, and one seeks to develop this type of body in the Sutra system by practising the six perfections under the influence of great compassion and the altruistic intention to become enlightened. The distinctive feature of Mantra is that, in addition one engages in a technique that is similar in aspect to the type of Form Body one is trying to achieve. What one is practising is concordant in aspect with the fruit one is trying to achieve. In this context, one of the distinctive features of the Secret Mantra vehicle is an indivisibility' of entity of method and wisdom.

How is it that in Mantra there comes to be an indivisibility of method and wisdom? In Mantra there is the practice of deity yoga in which one observes or imagines a divine body, this being in the class of compassionate vast appearances, and through this the collection of merit is accumulated. The very same consciousness ascertains the emptiness of inherent self-existence of that deity's body and thereby one accomplishes the collection of wisdom. This is how in one consciousness there is the indivisible factor of method and wisdom. Although method and wisdom are still separate conceptually, they are present in the entity of one consciousness.

The type of divine body that I am referring to is not the usual divine body of some being, but rather a case of the yogi newly cultivating in meditation an appearance of himself or herself in a divine body. This is what appears to one's own mental consciousness. Thus, when a yogi imagines himself or herself as a deity, and reflects on or realizes the emptiness of inherent existence of that divine body, I think there must be some small difference in the force of the consciousness, due to the special object that is the substratum of the emptiness.

In the Perfection Vehicle of the Sutra system there are no special techniques through which one purposely engages in trying to cause the substratum or subject, the emptiness of which you are meditating on, to keep appearing. Whereas in the Mantra system one specifically trains in maintaining the appearance of the divine body in the midst of ascertaining its absence of self existence.

There is an even more profound mode of the undifferent iability of entity of method and wisdom. These are practices involving exertion, and there is a special mode of undifferentiability of method and wisdom that comes about by way of the concentrated emphasis that a yogi puts on important places. Due to the substance on which the yogi concentrates, there is a difference in the mode of undifferentiability of method and wisdom. In highest yoga tantra the substance is the very subtle wind and the very subtle mind. This basis itself is an undifferen-tiable entity. To practise this level it is necessary forcefully to stop the coarser levels of wind and consciousness. Many different techniques are explained for putting concentrated emphasis on different places in the body and so forth. This is the practice of the channels, the winds and the essential drops of fluid.

In general, in Highest Yoga Tantra there is the practice of putting emphasis on the channels, winds and drops. Within that, one group emphasizes the yoga of the winds, another concentrates on developing the four joys. There is another group that doesn't emphasize channels, winds and drops, but puts its emphasis just on sustaining a nonconceptual state, this latter includes Mahamudra and Dzog-chen.

Prior to engaging in the practice of Mantra it is necessary to receive an initiation. Initiation is a matter of one person passing the transmission of a blessing to another person. Although one can gain blessings even from reading books and so forth, there is a difference when one living person transmits a blessing to another, so in Secret Mantra, the Lama comes to be valued very highly. One has to take care with respect to a Lama; the Lama has to take care and the student has to take care. It is said: 'When practitioners do not bear the true or proper form of the practice that is an indication of the degeneration of the Dharma'.

Within initiations there are many different variations. It is said that there is no god-creator, but now with initiation there are a lot of gods. What are these gods?

It was said earlier that from the beginning of one's Bodhisattva practice one is wishing and aiming for a state where one can bring vast, effective help to sentient beings. Due to this wishing, this attitude, this aspiration, when one is a Buddha, one spontaneously and without exertion brings about help to other beings. Like the reflection of the moon, which requires some place for the moon to shine on for it to appear, in a similar way, the spontaneous appearance of Form Bodies of a Buddha need beings to whom they appear. Now, whether that reflection appears clearly, or unclearly, big or small depends upon the vessel on which the moon is shining. Likewise the Form Bodies of a Buddha appear spontaneously and without exertion to trainees, in keeping with their interests, dispositions, beliefs, needs and so forth.

For trainees of the three Lower Tantras, the Form Bodies of the Buddhas appear in aspects making use of the five pleasurable attributes of the Desire Realm-forms, sounds, etc., but not in the context of using the bliss arising from the joining of the male and female organs. For those trainees who cannot make use of the path of the pleasurable attributes of the Desire Realm, the Form Body appears as a Supreme Emanation Body, in the aspect of a fully-ordained monk. For a person who has the disposition, capability and so forth to practise Highest Yoga Tantra, and whose abilities are activated and manifest, the Form Bodies appear in the aspect of male and female deities in union.

For those who are capable of using the factor of hatred in the path, the deities appear in a wrathful aspect, for those who are mainly capable of using desire, they appear in a peaceful aspect. It is in this context that three levels of practices or activities are described, practices devoid of desire, vast activities and the practice or activities of the Great Seal. Just as Shakyamuni Buddha was one person and appeared as one person, there are deities in the Tantra sets which appear as one single deity. A deity such as Guhyasamaja, in a mandala of thirty-two deities, is a case of one deity appearing in thirty-two different aspects. There are not thirty-two persons. There is only one and the rest of the deities are aspects of that one person.

If you use what I've been explaining as a key, you can increase your understanding. After one has received initiation it is important to keep the pledges and vows.