Stillness Speaks
»» Chapter 3: The Egoic Self 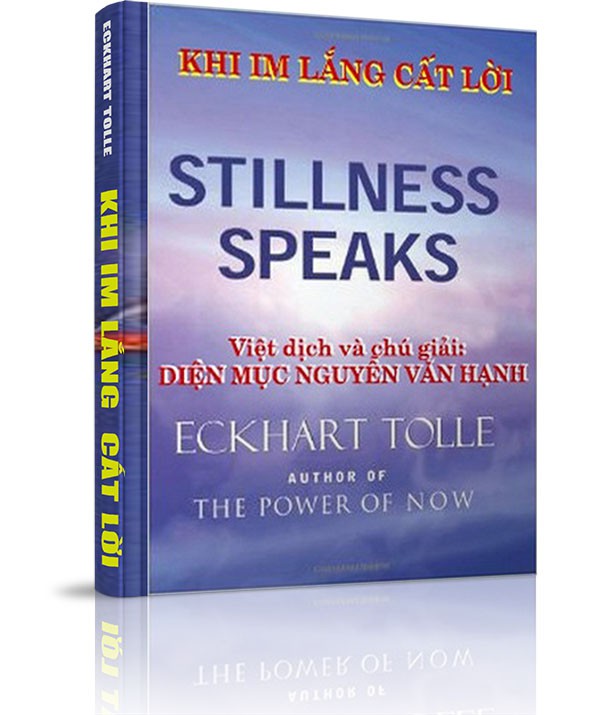 Tải sách dạng
epub, mobi, lrf...
(có phí)
The mind is incessantly looking not only for food for thought; it is looking for food for its identity, its sense of self. This is how the ego comes into existence and continuously re-creates itself.

When you think or speak about yourself, when you say, “I,” what you usually refer to is “me and my story.” This is the “I” of your likes and dislikes, fears and desires, the “I” that is never satisfied for long. It is a mind-made sense of who you are, conditioned by the past and seeking to find its fulfillment in the future.

Can you see that this “I” is fleeting, a temporary formation, like a wave pattern on the surface of the water?

Who is it that sees this? Who is it that is aware of the fleetingness of your physical and psychological form? I am. This is the deeper “I” that has nothing to do with past and future.

What will be left of all the fearing and wanting associated with your problematic life situation that every day takes up most of your attention? A dash-one or two inches long, between the date of birth and date of death on your gravestone.

To the egoic self, this is a depressing thought. To you, it is liberating.

When each thought absorbs your attention completely, it means you identify with the voice in your head. Thought then becomes invested with a sense of self. This is the ego, the mind-made “me.” That mentally constructed self feels incomplete and precarious. That’s why fearing and wanting are its predominant emotions and motivating forces.

When you recognize that there is a voice in your head that pretends to be you and never stops speaking, you are awakening out of your unconscious identification with the stream of thinking. When you notice that voice, you realize that who you are is not the voice-the thinker-but the one who is aware of it.

Knowing yourself as the awareness behind the voice is freedom.

The egoic self is always engaged in seeking. It is seeking more of this or that to add to itself, to make itself feel more complete. This explains the ego’s compulsive preoccupation with future.

Whenever you become aware of yourself “living for the next moment,” you have already stepped out of that egoic mind pattern, and the possibility of choosing to give your full attention to this moment arises simultaneously.

By giving your full attention to this moment, an intelligence far greater than the egoic mind enters your life.

When you live through the ego, you always reduce the present moment to a means to an end. You live for the future, and when you achieve your goals, they don’t satisfy you, at least not for long.

When you give more attention to the doing than to the future result that you want to achieve through it, you break the old egoic conditioning. Your doing then becomes not only a great deal more effective, but infinitely more fulfilling and joyful.

Almost every ego contains at least an element of what we might call “victim identity.” Some people have such a strong victim image of themselves that it becomes the central core of their ego. Resentment and grievances form an essential part of their sense of self.

Even if your grievances are completely “justified,” you have constructed an identity for yourself that is much like a prison whose bars are made of thought forms. See what you are doing to yourself, or rather what your mind is doing to you. Feel the emotional attachment you have to your victim story and become aware of the compulsion to think or talk about it. Be there as the witnessing presence of your inner state. You don’t have to do anything. With the awareness comes transformation and freedom.

Complaining and reactivity are favorite mind patterns through which the ego strengthens itself. For many people, a large part of their mental-emotional activity consists of complaining and reacting against this or that. By doing this, you make others or a situation “wrong” and yourself “right.” Through being “right,” you feel superior, and through feeling superior, you strengthen your sense of self. In reality, of course, you are only strengthening the illusion of ego.

Can you observe those patterns within yourself and recognize the complaining voice in your head for what it is?

The egoic sense of self needs conflict because its sense of a separate identity gets strengthened in fighting against this or that, and in demonstrating that this is “me” and that is not “me.”

Not infrequently, tribes, nations, and religions derive a strengthened sense of collective identity from having enemies. Who would the “believer” be without the “unbeliever?”

In your dealings with people, can you detect subtle feelings of either superiority or inferiority toward them? You are looking at the ego, which lives through comparison.

Envy is a by-product of the ego, which feels diminished if something good happens to someone else, or someone has more, knows more, or can do more than you. The ego’s identity depends on comparison and feeds on more. It will grasp at anything. If all else fails, you can strengthen your fictitious sense of self through seeing yourself as more unfairly treated by life or more ill than someone else.

What are the stories, the fictions from which you derive your sense of self?

Built into the very structure of the egoic self is a need to oppose, resist, and exclude to maintain the sense of separateness on which its continued survival depends. So there is “me” against the “other,” “us” against “them.”

The ego needs to be in conflict with something or someone. That explains why you are looking for peace and joy and love but cannot tolerate them for very long. You say you want happiness but are addicted to your unhappiness.

Your unhappiness ultimately arises not from the circumstances of your life but from the conditioning of your mind.

Do you carry feelings of guilt about something you did-or failed to do-in the past? This much is certain: you acted according to your level of consciousness or rather unconsciousness at that time. If you had been more aware, more conscious, you would have acted differently.

Guilt is another attempt by the ego to create an identity, a sense of self. To the ego, it doesn’t matter whether that self is positive or negative. What you did or failed to do was a manifestation of unconsciousness-human unconsciousness. The ego, however, personalizes it and says, “I did that,” and so you carry a mental image of yourself as “bad.”

Throughout history humans have inflicted countless violent, cruel, and hurtful acts on each other, and continue to do so. Are they all to be condemned; are they all guilty? Or are those acts simply expressions of unconsciousness, an evolutionary stage that we are now growing out of?

Jesus’ words, “Forgive them for they know not what they do,” also apply to yourself.

If you set egoic goals for the purpose of freeing yourself, enhancing yourself or your sense of importance, even if you achieve them, they will not satisfy you.

Set goals, but know that the arriving is not all that important. When anything arises out of presence, it means this moment is not a means to an end: the doing is fulfilling in itself every moment. You are no longer reducing the Now to a means to an end, which is the egoic consciousness.

"No self, no problem,” said the Buddhist master when asked to explain the deeper meaning of Buddhism.