Chớ khinh tội nhỏ, cho rằng không hại; giọt nước tuy nhỏ, dần đầy hồ to! (Do not belittle any small evil and say that no ill comes about therefrom. Small is a drop of water, yet it fills a big vessel.)Kinh Đại Bát Niết-bàn

The Art of Living
»» FOREWORD 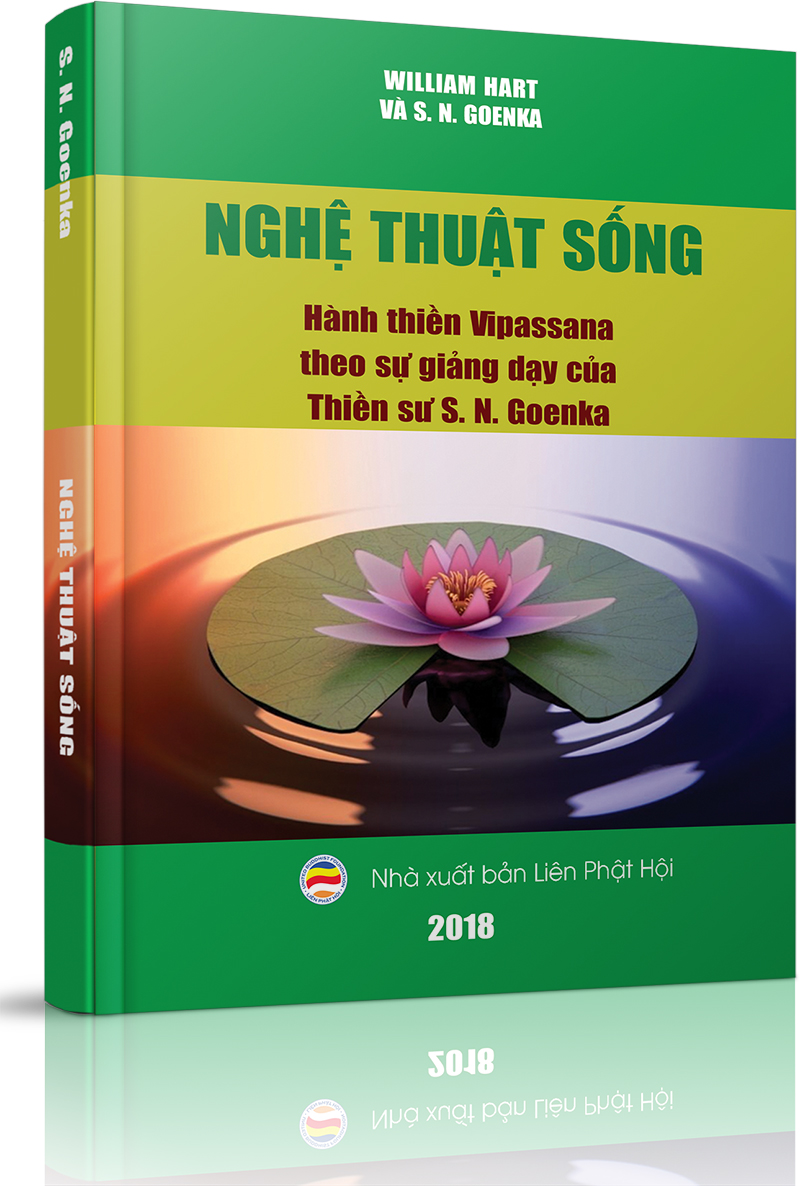 I am forever grateful for the change that Vipassana meditation has wrought in my life. When I first learned this technique I felt as though I had been wandering in a maze of blind alleys and now at last had found the royal road. In the years since then I have kept following this road, and with every step the goal has become clearer: liberation from all suffering, full enlightenment. I cannot claim to have reached the final goal, but I have no doubt that this way leads directly there.

For showing me this way I am always indebted to Sayagyi U Ba Khin and to the chain of teachers who kept the technique alive through millennia from the time of the Buddha. On behalf of them all I encourage others to take this road, so that they also may find the way out of suffering.

Although many thousands of people from Western countries have learned it, up to now no book has appeared that accurately describes this form of Vipassana at length. I am pleased that at last a serious meditator has undertaken to fill this gap.

May this book deepen the understanding of those who practice Vipassana meditation, and may it encourage others to try this technique so that they too may experience the happiness of liberation.

May all beings be happy!

Among the various types of meditation in the world today, the Vipassana method taught by S. N. Goenka is unique. This technique is a simple, logical way to achieve real peace of mind and to lead a happy, useful life. Long preserved within the Buddhist community in Burma, Vipassana itself contains nothing of a sectarian nature, and can be accepted and applied by people of any background.

S. N. Goenka is a retired industrialist, and a former leader of the Indian community in Burma. Born into a conservative Hindu family, he suffered from youth onward from severe migraine headaches. His search for a cure brought him into contact in 1955 with Sayagyi U Ba Khin, who combined the public role of a senior civil servant with the private role of a teacher of meditation. In learning Vipassana from U Ba Khin, Mr. Goenka found a discipline that went far beyond alleviating the symptoms of physical disease and transcended cultural and religious barriers. Vipassana gradually transformed his life in the ensuing years of practice and study under the guidance of his teacher.

In 1969 Mr. Goenka was authorized as a teacher of Vipassana meditation by U Ba Khin. In that year he came to India and began teaching Vipassana there, reintroducing this technique into the land of its origin. In a country still sharply divided by caste and religion, Mr. Goenka’s courses have attracted thousands of people of every background. Thousands of Westerners have also participated in Vipassana courses, attracted by the practical nature of the technique.

The qualities of Vipassana are exemplified by Mr. Goenka himself. He is a pragmatic person, in touch with the ordinary realities of life and able to deal with them incisively, but in every situation he maintains an extraordinary calmness of mind. Along with that calmness is a deep compassion for others, an ability to empathize with virtually any human being. There is, however, nothing solemn about him. He has an engaging sense of humor which he exercises in his teaching. Course participants long remember his smile, his laughter, and his often-repeated motto, “Be happy!” Clearly Vipassana has brought him happiness, and he is eager to share that happiness with others by showing them the technique that has worked so well for him.

Despite his magnetic presence, Mr. Goenka has no wish to be a guru who turns his disciples into automatons. Instead he teaches self-responsibility. The real test of Vipassana, he says, is applying it in life. He encourages meditators not to sit at his feet, but to go out and live happily in the world. He shuns all expressions of devotion to him, instead directing his students to be devoted to the technique, to the truth that they find within themselves.

In Burma it has traditionally been the prerogative of Buddhist monks to teach meditation. Like his teacher, however, Mr. Goenka is a layman and is the head of a large family. Nevertheless, the clarity of his teaching and the efficacy of the technique itself have won the approval of senior monks in Burma, India, and Sri Lanka, a number of whom have taken courses under his guidance.

To maintain its purity, Mr. Goenka insists, meditation must never become a business. Courses and centers operating under his direction are all run on a totally nonprofit basis. He himself receives no remuneration for his work directly or indirectly, nor do the assistant teachers whom he has authorized to teach courses as his representatives. He distributes the technique of Vipassana purely as a service to humanity, to help those who are in need of help.

S. N. Goenka is one of the few Indian spiritual leaders as highly respected in India as in the West. However, he has never sought publicity, preferring to rely on word of mouth to spread interest in Vipassana; and he has always emphasized the importance of actual meditation practice over mere writings about meditation. For these reasons he is less widely known than he deserves to be. This book is the first full-length study of his teaching prepared under his guidance and with his approval.

The principal source materials for this work are the discourses given by Mr. Goenka during a ten-day Vipassana course and, to a lesser extent, his written articles in English. I have used these materials freely, borrowing not only lines of argument and organization of specific points, but also examples given in the discourses, and frequently exact wording, even entire sentences. To those who have participated in Vipassana meditation courses as taught by him, much of this book will certainly be familiar, and they may even be able to identify the particular discourse or article that has been used at a certain point in the text.

During a course, the explanations of the teacher are accompanied step by step by the experience of the participants in meditation. Here the material has been reorganized for the benefit of a different audience, people who are merely reading about meditation without necessarily having practised it. For such readers an attempt has been made to present the teaching as it is actually experienced: a logical progression flowing unbroken from the first step to the final goal. That organic wholeness is most easily apparent to the meditator, but this work tries to provide non-meditators with a glimpse of the teaching as it unfolds to one who practises it.

Certain sections deliberately preserve the tone of the spoken word in order to convey a more vivid impression of the way in which Mr. Goenka teaches. These sections are the stories set between the chapters and the questions and answers that conclude each chapter, dialogues taken from actual discussions with students during a course or in private interviews. Some of the stories are drawn from events in the life of the Buddha, others from the rich Indian heritage of folk tales, and others still from the personal experiences of Mr. Goenka. All are narrated in his own words, not with the intention of improving on the originals but simply to present the stories in a fresh way, emphasizing their relevance to the practice of meditation. These stories lighten the serious atmosphere of a Vipassana course and offer inspiration by illustrating central points of the teaching in memorable form. Of the many such stories told in a ten-day course, only a small selection has been included here.

Quotations are from the oldest and most widely accepted record of the Buddha's words, the Discourse Collection (Sutta Piṭaka), as it has been preserved in the ancient Pāli language in Theravadin Buddhist countries. To maintain a uniform tone throughout the book, I have attempted to translate afresh all the passages quoted here. In doing so I have taken guidance from the work of leading modern translators. However, since this is not a scholarly work, I have not striven to achieve word-for-word accuracy in translating the Pāli. Instead I have tried to convey in straightforward language the sense of each passage as it appears to a Vipassana meditator in the light of his meditation experience. Perhaps the rendering of certain words or passages may seem unorthodox, but in matters of substance, I hope, the English follows the most literal meaning of the original texts.

For the sake of consistency and precision, Buddhist terms used in the text have been given in their Pāli forms even though in some cases the Sanskrit may be more familiar to readers of English. For example, the Pāli dhamma is used in place of the Sanskrit dharma, kamma instead of karma, nibbāna instead of nirvāṇa, saṅkhāra instead of saṃskāra. To make the text easier to understand, Pāli words have been pluralized in English style, by adding s. In general, Pāli words in the text have been kept to a minimum to avoid unnecessary obscurity. However, they often offer a convenient shorthand for certain concepts unfamiliar to Western thought which cannot easily be expressed in a single word in English. For this reason, at points it has seemed preferable to use the Pāli rather than a longer English phrase. All Pāli forms printed in boldface type are defined in the glossary at the back of this book.

The technique of Vipassana offers equal benefits to all who practice it, without any discrimination on the basis of race, class, or sex. In order to remain faithful to this universal approach, I have tried to avoid using sexually exclusive language in the text. At points, however, I have used the pronoun “he” to refer to a meditator of unspecified gender. Readers are asked to consider the usage as sexually indeterminate. There is no intention of excluding women or giving undue prominence to men, since such a partiality would be contrary to the basic teaching and spirit of Vipassana.

I am grateful to the many who helped on this project. In particular, I wish to express my deep gratitude to S. N. Goenka for taking time from his busy schedule to look over the work as it developed, and even more for guiding me to take a few beginning steps on the path described here.

In a deeper sense, the true author of this work is S. N. Goenka, since my purpose is simply to present his transmission of the teaching of the Buddha. The merits of this work belong to him. Whatever defects exist are my own responsibility.